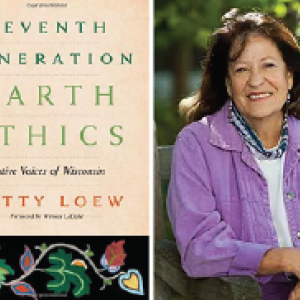 This event has passed, but you can watch a recording at https://www.crowdcast.io/e/wbf-seventh-generation

In partnership with Madison Public Library's Native American Storyteller-in-Residence program, author Patty Loew will appear live on Crowdcast to discuss her book, Seventh Generation Earth Ethics, and the increasing pressures to turn Indigenous lands into "sacrifice zones"--geographic areas that are permanently affected by environmental damage. Join the event at: https://www.crowdcast.io/e/wbf-seventh-generation. Before the event begins, you will see a countdown and the event image.

Wisconsin's rich tradition of sustainability rightfully includes its First Americans, who along with Aldo Leopold, John Muir, and Gaylord Nelson shaped its landscape and informed its "earth ethics." This collection of Native biographies, one from each of the twelve Indian nations of Wisconsin, introduces the reader to some of the most important figures in Native sustainability: from anti-mining activists like Walt Bresette (Red Cliff Ojibwe) and Hillary Waukau (Menominee) to treaty rights advocates like James Schlender (Lac Courte Oreille Ojibwe), artists like Truman Lowe (Ho-Chunk), and educators like Dorothy "Dot" Davids (Stockbridge-Munsee Community Band of Mohican Indians), along with tribal genealogists, land stewards, and preservers of language and culture. Each of the biographies speaks to traditional ecological values and cultural sensibilities, highlighting men and women who helped to sustain and nurture their nations in the past and present. The Native people whose lives are depicted in Seventh Generation Earth Ethics understood the cultural gravity that kept their people rooted to their ancestral lands and acted in ways that ensured the growth and success of future generations. In this way they honor the Ojibwe's Seventh Generation philosophy, which cautions decision-makers to consider how their actions will affect seven generations in the future -- some 240 years.

The Ho-Chunk peoples' historical territory include Wisconsin, Minnesota, Iowa, Illinois, and Missouri. They originated outside of Green Bay in a place called Red Banks (Mogasuc). But, who are they? What does it mean to be Ho-Chunk? How do they survive in two worlds? From October through December, join Ho-Chunk Nation storyteller and tribal member AJ (Andi) Cloud for a variety of interactive storytelling and creative learning opportunities for all ages. With art workshops, activity kits, outdoor story walks, digital stories, exhibits, and more across the city, there are lots of ways to participate, celebrate, and learn.

Patty Loew, Ph.D., is a professor in the Medill School of Journalism and the inaugural director of the Center for Native American and Indigenous Research at Northwestern University. A citizen of Mashkiiziibii- the Bad River Band of Lake Superior Ojibwe- Dr. Loew is a former broadcast journalist in public and commercial television. She is the author of four books, including Indian Nations of Wisconsin: Histories of Endurance and Renewal; Native People of Wisconsin, which is used by 20,000 Wisconsin school children as a social studies text; Teachers Guide to Native People of Wisconsin; and Seventh Generation Earth Ethics. In 2019, she produced a StoryMap and GPS-guided Indigenous Tour of Northwestern: https://bit.ly/2n8Acr5

Loew has produced many documentaries for public and commercial television, including the award-winning Way of the Warrior, which aired nationally on PBS, and Faces and Places of Alaska for KATU-TV in Portland. She works extensively with Native youth, teaching digital storytelling skills as a way to grow the next generation of Native storytellers and land stewards. In 2019 Dr. Loew was elected to the American Academy of Arts and Sciences and received the state of Wisconsin’s Martin Luther King Jr. Heritage Award.

Series
Ho-Chunk Through Story: The Origin, The Wayz, and The Life