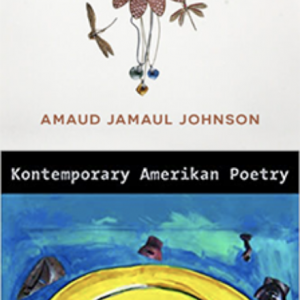 About Imperial Liquor: Imperial Liquor is a chronicle of melancholy, a reaction to the monotony of racism. These poems concern loneliness, fear, fatigue, rage, and love; they hold fatherhood held against the vulnerability of the black male body, aging, and urban decay. Part remembrance, part swan song for the Compton, California of the 1980s, Johnson examines the limitations of romance to heal broken relationships or rebuild a broken city. Slow Jams, red-lit rooms, cheap liquor, like seduction and betrayal—what’s more American? This book tracks echoes, rides the residue of music “after the love is gone.”

About Kontemporary Amerikan Poetry: John Murillo’s second book is a reflective look at the legacy of institutional, accepted violence against Blacks and Latinos and the personal and societal wreckage wrought by long histories of subjugation. A sparrow trapped in a car window evokes a mother battered by a father’s fists; a workout at an iron gym recalls a long-ago mentor who pushed the speaker “to become something unbreakable.” The presence of these and poetic forbears—Gil Scott-Heron, Yusef Komunyakaa—provide a context for strength in the face of danger and anger. At the heart of the book is a sonnet crown triggered by the shooting deaths of three Brooklyn men that becomes an extended meditation on the history of racial injustice and the notion of payback as a form of justice.

Join the event at: https://www.crowdcast.io/e/wbf-imperial-kontemporary.